May 2, 2020
Sharing Is Caring
Governor Nyesom Wike of Rivers State has said he is not interested in getting accolades from the Federal Government in his bid to protect Rivers State from being ravaged by COVID-19 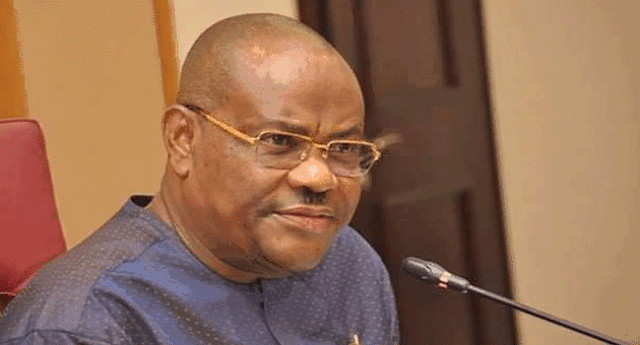 Wike also said his concern about the neglect of Rivers State in the COVID-19 fight by the Federal Government was always misconstrued for confrontation.
The Rivers State Governor made this known during a statewide broadcast on Friday, while also speaking on the effort of the state government towards eliminating COVID-19 from the state.
On the distribution of palliatives from the federal government, Wike said he rejected the over 1000 bags of rice because they were expired, adding that it was wrong for the Federal government to have asked Rivers State to go and take delivery of the trucks of rice in Calabar, the Cross River State capital.
He also stated that the disbursement of palliatives to states to curb the spread of the novel Coronavirus was selective and laced with bias.
Wike further berated the federal government’s swift response to Kano’s situation despite ignoring several earlier appeals from the Rivers State Government.
He noted that he was amazed that less than 48 hours after Kano State complained, the government intervened and gave them the needed support.
“What happened in Kano again tells you the inconsistencies and the kind of role the federal government plays. It is really unfortunate.
“When I said the federal government has not supported us, people want to bring down my head. Kano State Governor cried for help and in 48 hours, the president did a broadcast and provided support for the state.
“If they have responded to our request, we would have commended them. What crime have I committed. Is it that Kano state is more important than Rivers state or what?
“That is what happens. Is it that Rivers state is not part of Nigeria? There are those that are bigger than the country. There are also those they don’t see as part of Nigeria.
“They said we should go to Calabar and carry rice. Rice that is expired. How would they even ask us to go to Calabar? If you want to give us something, you bring it. We can’t go to Calabar. We know that our people are hungry, but hunger will not kill us,” he said.
Governor Wike also said the state will review its permit for the movement of oil workers because many oil companies have been flouting the state’s orders.
The Rivers State Governor, therefore, assured that his administration will continue to do its best to protect the people from COVID-19.