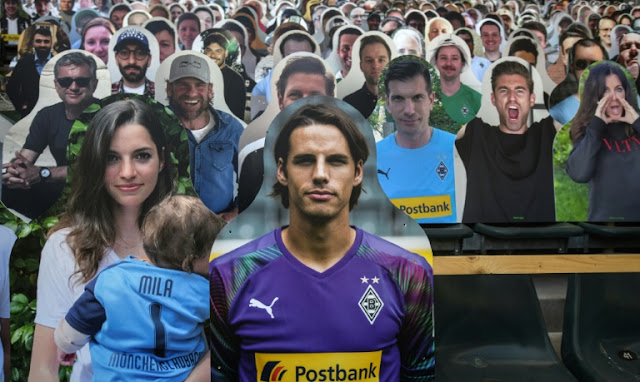 On Day Two of the return of Bundesliga,

life-sized images of football fans replaced the spectators in the stands, at least at Borussia Moenchengladbach.

The idea was the initiative of a Gladbach supporters’ group.
And it is catching fire, with many football fans jumping on the chance to have their images on the seats.
Thousands of people have taken up the offer, where they pay 19 euros to have their cut-out placed inside Borussia Park.
Season ticket holders can even have their lookalike allocated to their regular spot.
“It looks great, doesn’t make any noise, but creates a certain atmosphere,” said Gladbach defender Stefan Lainer.
“It’s definitely a great idea and I’m glad that so many took part.”
However, football fans still want to be at the stadium as a number of dissenting banners criticising the league’s resumption without fans were again visible across stadiums in Germany.
Millions tuned in last weekend to watch some live football, but a significant portion remained unhappy at the idea of games going ahead without the noisy backdrop provided by German supporters.
“Silent faces, cardboard reminders: Football without fans is nothing! For Borussia, against games behind closed doors!” read a series of banners at Gladbach’s Borussia Park.
Another in Paderborn, where the hosts drew 1-1 with Hoffenheim, said: “Basic law number one: the Bundesliga is above everything.”