” Robbery Pays Better Than Being A Painter” – Suspect Confessed

May 6, 2020
Sharing Is Caring
A 30-year old man, Chinedu Obinma, who was formerly a painter, has admitted that he was a robber and gave reasons he chose robbery as a means to survive in Lagos.
P.M.EXPRESS reports that the suspect, Obinma, was arrested by Police operatives from Ejigbo Division after he robbed a woman, who was selling hot drinks; carted away her phone and transferred all her money about N230, 000 to another bank account before he was caught.
The suspect reportedly told the Police that he was a painter but when the business was not flourishing, he abandoned it and moved into robbery and there were changes in his life. 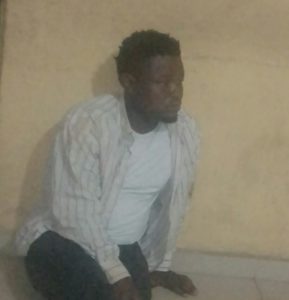 He said he hails from Anambra State but came to Lagos some years back and tried to make a living as a painter. When he was not getting enough to take care of himself, he joined robbery.
According to the residents, the suspect, Obinma, said that he had engaged in several robbery operations without the use of arms but deployed tricks to steal people’s personal items and escape.
Obinma had always succeeded until he came from Cele area of Okota to Ejigbo area of Lagos when he went to a woman and bought a drink. He gave the woman N1000 for N100 worth of drink. When the woman went to look for change, he stole her phone and gave it to his accomplice who quickly used the woman’s phone to transfer her money to another account.
However, he was eventually caught after the woman looked for her phone, raised alarm and held him. Her neighbours attempted to mob him before the Police rescued him and took him to the station for interrogation.
When P.M.EXPRESS correspondent visited Ejigbo Police Division to get comments from the DPO, CSP Olabisi Okuwobi, over the matter, she was said to have gone out for monitoring in the area.
However, Police sources confirmed the arrest of the suspect, Obinma and said he will be charged to Court after the conclusion of investigation