Prime Suspect In Murder Of Fasoranti’s Daughter Tries To Escape

May 7, 2020
Sharing Is Caring
PRIME SUSPECT IN MURDER OF PA REUBEN FASORANTI’S DAUGHTER TRIES TO ESCAPE.
Adamu Adamu, one of the prime suspects in the murder of Mrs Funke Olakunri, daughter of Pa Reuben Fasoranti, on Tuesday tries to escape from IDH where he is currently being treated for Coronavirus. 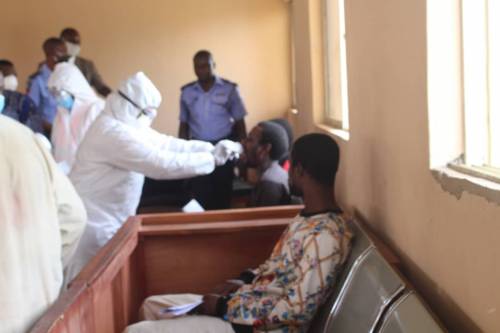 Adamu, who is being investigated closely alongside three others, was called up before Chief Magistrate Victoria Bob-Manuel at the Akure Magistrate Court a month ago.
A police source affirmed this incident on Wednesday in Akure.
He uncovered that the suspect had been using various strategies inorder to escape from the emergency clinic.
As per the police source, Adamu had just been “chained to a bed” at the facility to keep him from getting away.
We noticed that each time the suspect took permission from nurses to ease himself, he would stay for a long time in the toilet.
“But we have tightened security around the Infectious Disease Hospital and also drafted more people to the facility,” the police source said.
When reached, Mr Tee-Leo Ikoro, representative for the Ondo State Police Command, said the police have drafted more workforce to the facility to guarantee that the suspect didn’t get away.
He included that the police will secure the suspect until he is fully healthy to face trail on the murder case.