May 9, 2020
Sharing Is Caring
NASARAWA State Command of the Nigerian Security and Civil Defence Corps, NSCDC, has arrested a 22-year-old pregnant woman, Veronica Boniface, for allegedly stabbing her husband to death over a phone call with a strange woman. 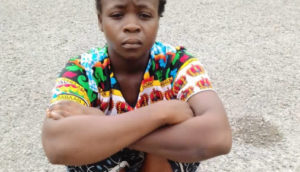 Parading the suspect at the command headquarters in Lafia, the NSCDC state commandant, Habu Fari, said the woman was arrested in Obene town of Keana Local Government Area of the state, after an intelligence report.
According to the NSCDS boss, the husband was rushed to the hospital after she stabbed the husband with a kitchen knife following an argument about a phone call from a purported strange woman.
Speaking with newsmen, Veronica said she regretted her action and pleaded for leniency.
The suspect disclosed that she was one-month-pregnant for her late husband.
She explained that it was the handiwork of the devil, saying that she intended to scare her husband and collect the phone, but eventually ended up killing him.