May 5, 2020
Sharing Is Caring
SaharaReporters has uncovered another corrupt activity involving Speaker of the Lagos State House of Assembly, Mudashiru Obasa. He involved one of his three wives in the fraudulent scheme.
In this multimillionaire scandal and looting of public funds, Obasa, with the active connivance of some lawmakers orchestrated the disbursement of N10m monthly allocation to his wife under the guise of gender inclusiveness programme for women.
The programme, according to document seen by SaharaReporters, would be headed by his wife and would also be in charge of the funds.
In a letter written by the Clerk of the House ordering the release of the funds, the monthly allocation would be for the establishing of a grassroots support programme, which will be centred on socio-economic and political programmes to be coordinated by wives of legislators at the various constituencies. 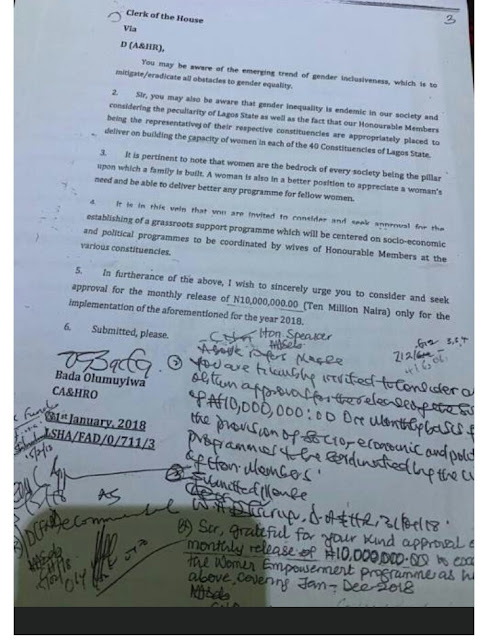 The letter used to approve the monthly allocation reads, “You may be aware of the emerging trend of gender inclusiveness, which is to mitigate/eradicate all obstacles to gender equality.
“Sir, you may also be aware that gender inequality is endemic in our society and considering the peculiarity of Lagos State as well as the fact that our honourable members being the representatives of their respective constituencies are appropriately placed to deliver on building the capacity of women in each of the 40 constituencies of Lagos State.
“It is pertinent to note that women are the bedrock of every society being the pillar upon which a family is built. A woman is also in a better position to appreciate a woman’s need and be able to deliver better any programme for fellow women.
“It is in this vein that you are invited to consider and seek approval for the establishing of a grassroots support programme, which will be centred on socio-economic and political programmes to be coordinated by wives of honourable members at the various constituencies.
“In furtherance of the above, I wish to sincerely urge you to consider and seek approval for the monthly release of N10,000,000 only for the implementation of the aforementioned for the year 2018.”
Checks by SaharaReporters revealed that no programme around socio-economic and political activities was established at various constituencies.
Wives of lawmakers interviewed claimed not to know of the allocation or receipt of any such amount from the Speaker’s wife.
They also denied having knowledge of the establishment of any socio-economic and political programmes at their constituencies.
Some of them revealed that the highest fund received from the state Assembly was the sum of N100,000 paid as travel and entertainment allowance during meetings of wives of honourable members.
They added that only two meetings have been held between 2018 and now.
The looting of public funds by the Speaker continues with the backing of his godfathers in the state.
On Sunday, SaharaReporters revealed how Obasa had mobilised thugs with N50m so as to invade its Civic Media Lab office and burn down the place with anybody found there as a way of getting back at the online news publication for exposing his fraudulent activities in the Lagos parliament where he had been feeding fat on public funds.
In a series of reports in recent weeks, SaharaReporters had exposed how Obasa used a number of companies registered under different names to execute contracts and siphon public funds.
One of the reports said to have greatly embarrassed the Speaker, exposed how he spent N17m monthly to maintain his personal residence and guest house.
The act violates the Public Procurement Act 2007 and the Corrupt Practices and Other Related Offences Act, 2000, which bars political office holders from issuing contracts to themselves or companies they directly benefit from.