Man Who Assaulted His Wife Arrested

May 14, 2020
Sharing Is Caring
A man, Afobaje Maiyegun, has been arrested by the police in Lagos for beating his wife.
Lagos Coordinator of Domestic and Sexual Violence Response Team (DSVRT), Mrs Titilola Vivour-Adeniyi, said he will be charged to court on Friday.
Vivour-Adeniyi said on Thursday that Maiyegun’s arrest followed a video that went viral in which he was seen boasting that he had just beaten up his wife and declared he is ‘’waiting for her police‘’ to come and arrest him. 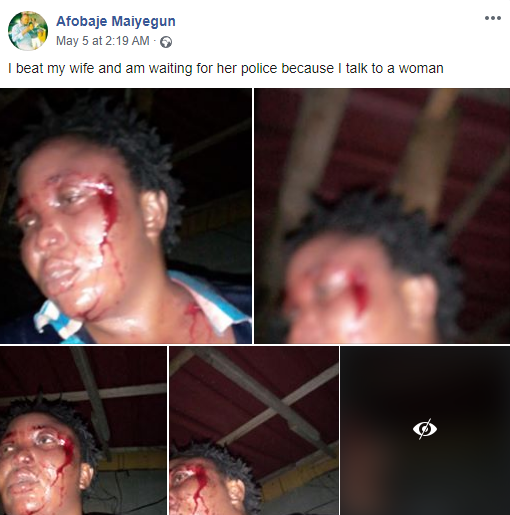 She said a team of DSVRT reached out to ACP Gbolahan Odugbemi, Area Commander, Area J Police Station, who ensured the arrest of Maiyegun.
According to her, preliminary investigation conducted revealed it was not the first time Maiyegun would perpetrate such a dastardly act.
She said a partner NGO, HerFessions Initiative, was on ground to assist with the investigation.
“This is to sound a clear warning that the Governor of Lagos State, Mr. Babajide Sanwo-Olu has declared a zero tolerance to Sexual and Gender Based Violence in the State and as such perpetrators will face the full weight of the law,” she added.
The investigation shows that there was outrage on Thursday over a man, Afobaje Maiyegun, who assaulted his wife and braggged about it on Facebook.
Maiyegun took to his Facebook account to announce he assaulted his wife and posted pictures of the battered woman.
The wife, in the pictures, was in a pool of her blood.
Maiyegun wrote on his Facebook page: “I beat my wife and am waiting for her police because I talk to a woman”.
His post attracted angry reactions with many condemning him for not only beating up his wife but having the effontery to post his wife’s bloody face on social media.
Esom Vargilus responded: “Why did you beat your wife? You said you talked to a woman, yet it depends on what you discussed with the woman you talked to. Remember beating her up can not and will never solve the problems. Next time take a civilized approach.”
Dabio Michael condemned the action saying: “This is very very bad, even if she misbehaves you don’t need to beat her this way talk less of posting it. if you no what’s good for you, better delete it now…”
Bolanle Jerrison described the action as cowardice.
“This is animalistic act, posting it means it’s a deliberate wickedness. The law will take its course, ” Jerrison wrote.
Tayo Isaac cautioned him to delete the post, adding “You don’t have to post this on social media. Even if you have misunderstanding with your wife, you try to play maturity and settle the matter amicably with her. This is not fair. Please, remove this picture because people will be sharing it and you don’t know what might be the end of it.”
Olawale Moshood described Maiyegun’s actions as stupid.
He said: “You don’t have too show us your stupidity on social media.
” So if you beat your wife, must we see the pictures or must you tell us about it on social media?
“If you like delete it and if you like don’t delete it, when the problem starts, no one will help you out. You post it on social media to show people how strong you are abi?”