May 8, 2020
Sharing Is Caring
South Africa on Wednesday confirmed that Madagascar had requested assistance with scientific research on Artemisia – the herb used in the production of COVID-Organics. 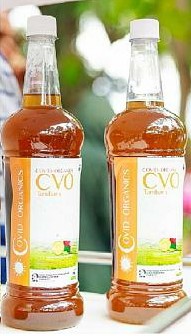 Addressing the issue, Health Minister Zweli Mkhize said South Africa had agreed that its scientists will only assist with analysis of the herb.
“We received a call from the government of Madagascar, who asked for help with scientific research. Our scientists would be able to assist with this research. We will only get involved in a scientific analysis of the herb. We are not at that point yet,” Mkhize tweeted.
The now controversial herb has been donated by the Malagasy government to a number of African countries amongst them: Equatorial Guinea, Republic of Congo and Guinea-Bissau – the latter received a consignment meant for the ECOWAS region.
The African Union, AU, have confirmed that they are in talks with Madagascar over COVID-Organics, the island nation’s purported herbal cure for COVID-19.
A May 4 statement by the AU said it was in contact with Antananarivo “through its embassy in Addis Ababa, with a view to obtain technical data regarding the safety and efficiency of a herbal remedy, recently announced by Madagascar for the reported prevention and treatment of COVID19.”
AU and Malagasy diplomats have held meetings in Addis Ababa with the view to getting necessary information regarding the remedy.
“Once furnished with the details, the Union, through the Africa Centres for Disease Control and Prevention (Africa CDC), will review the scientific data gathered so far on the safety and efficacy of the COVID-19 Organics.
“This review will be based on global technical and ethical norms to garner the necessary scientific evidence regarding the performance of the tonic,” an AU statement further disclosed.
Meanwhile, the World Health Organization, WHO; have reiterated its caution against people putting their faith in herbal remedies that have not been scientifically tested.
In a statement, WHO said despite supporting all efforts – including traditional medicines – in search for treatments, it was important that any purported treatments be thoroughly tested.
In his last address, President Rajoelina said Madagascar was building a factory to scale up production. He also said the cure was to undergo clinical trials and that aside the drinks, injection options were being pursued. Over half-dozen African countries have expressed interest in it.

Madagascar herbs: We received a call from the government of Madagascar, who asked for help with scientific research.Our scientists would be able to assist with this research.We will only get involved in a scientific analysis of the herb. We are not at that point yet.
— Dr Zweli Mkhize (@DrZweliMkhize) May 6, 2020