May 14, 2020
Sharing Is Caring
Distribution of food items to families of public school pupils under the National Home Grown School Feeding Programme (NHGSFP) will begin in Lagos next week. 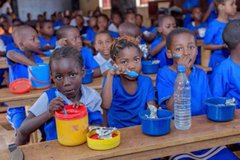 Lagos State Universal Basic Education Board (LASUBEB) Chairman, Mr. Wahab Alawiye-King was at the Sam Ethnan Airforce base, Ikeja, Thursday to inspect the foodstuff warehoused in one of the base storage facilities.
He said from next week distribution to the representatives of households of 37,589 pupils would begin in 202 distribution centres across the 20 Local Government Education Authorities (LGEA).
“This is in line with the presidential directive that homegrown school feeding programme should continue in spite of school closure. So the Ministry of Humanitarian Affairs, Disaster Management and Social Development in collaboration with the Lagos State government through the State Universal Basic Education Board and other governmental agencies have been working for the past four weeks to ensure that this directive is carried out.  We have identified all the households that will benefit from this.
“This programme has been running before now. It is targeted at Primary 1-3 pupils in our public primary schools. We have gone round using our food vendors and School Based Management board based on the available data to identify and verify the households provided.
“We are giving them 5kg of rice, 5kg of beans, palm oil, groundnut oil, two sachets of tomatoes paste, half crate of eggs and salt,” he said.
The food items were bagged under the supervision of the Special Assistant to  President Muhammadu Buhari on the NHGSFP, Mrs. Titilola Adeyemi-Doro, who said the distribution would be done monthly as long as schools remain closed.
“Each bag is for a month. If the lockdown should continue, this will go on every month,” she said
With the Federal Government spending N679 million on the initiative daily, there have been concerns about the programme being a drain pipe of scarce resources with the fears that the food would not get to the designated beneficiaries.
However, Mrs. Adeyemi-Doro said the programme would work with data gotten from the school.
“We are relying on the data from the schools – those that we have captured already on the school feeding programme.
“For this first distribution, we are perfecting data with the household identification. We are also Identifying the children that have not been captured initially on the school feeding programme. So by the time we come back for the next phase of distribution they would have been captured,” she said.
Alawite-King added that there were local and international organisations monitoring the implementation to ensure it is properly done.
“This is been monitored by local, international organisations to ensure that transparency is strictly maintained. We have this protocol to ensure it won’t go the private way,” he said.
Regarding the need to maintain physical distancing during the distribution, Alawiye-King said food vouchers would be shared to the households a day before distribution, adding that all health and safety rules would be followed.
“We have enough PPE to ensure that all laid down health regulations are followed,” he said.