May 14, 2020
Sharing Is Caring
One of the injured Taskforce members who was attacked at the demolished Prodest hotel by hoodlums allegedly led by the wanted Princewill Osareojiji, Peoples Democratic Party, PDP, Youth Leader in Eleme Local Government area, is dead. 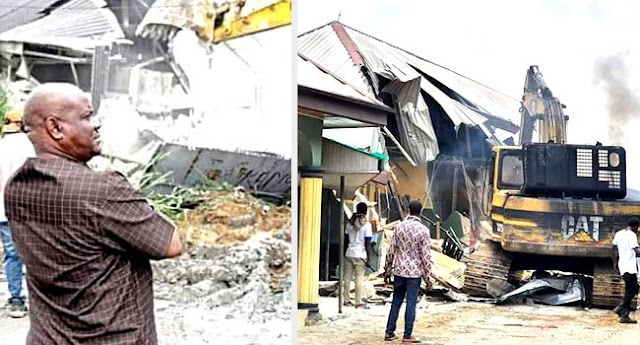 The deceased, whose identity was not revealed for security reasons was said to have died last night, Tuesday, May 12 at the hospital where the other injured victims were taking treatment.
The Commissioner for Information and Communications, Paulinus Nsirim, who broke the sad news at a press briefing in Port Harcourt on Wednesday, expressed regrets that the demolition of Prodest Hotel in Alode, Eleme and Etemeteh Hotel in Onne had been hijacked by opposition elements after the owners deliberately flouted Executive Order 6.
According to the Nsirim, “These two hotels, Prodest Hotel, Alode, Eleme and Etemeteh Hotel, Onne not only flouted the Executive Order, the Hotel Manager of Prodest invited the wanted PDP Eleme Youth Leader, Princewill Osaroejiji, who came with thugs to unleash mayhem on Task Force operatives who were on ground to close down the facility”.
He went further to state that the Rivers State Government has approved the building of a Primary School for Eleme People on the site of the demolished Prodest Hotel, just as it has also acquired the properties of the two hotels from their owners.
The Spokesman for the Rivers State Government explained that Governor Nyesom Wike and the Rivers State Security Council took the decision to demolish the hotel in the interest of Rivers State and her people.
He said that days before that demolition, everyone was aware that the State Government sensitized the people on the consequence of flouting Executive Order 6.
“Eleme people are happy with the demolition. In several publications they made after the demolition, they have declared that Prodest Hotel is a criminal hideout and a den for cultists.
“They added that Prodest Hotel is a centre for gun-running by the wanted PDP Youth Leader. It was his criminal tendencies that emboldened him to unleash mayhem on State officials when the Hotel Manager invited him,” he said.
He pointed out that over the last few weeks, Wike has provided national leadership in relation to the fight against coronavirus.
The Information Commissioner recalled that Director-General of the Nigeria Centre for Disease Control (NCDC), Dr. Chikwe Ihekweazu captured the outstanding leadership role of Governor Wike in the fight against coronavirus when he visited the State recently.
In his words: “I want to thank you for your firm, strong, committed and personally led response to COVID-19. We thank you very much for your leadership and we need your leadership to continue in order for us to continue doing our work nationally.”
Nsirim restated that the fight against Coronavirus in the State has been premised on the Rule of Law, saying it was Wike who first signed an Executive Order that led to Border Closure and other actions.