May 1, 2020
Sharing Is Caring
Governor Godwin Obaseki of Edo state has declared a 23 year old nursing mother, Mrs Amaka Okoro, who is a resident of the state, wanted.
According to the governor, Mrs Okoro tested positive for the novel Coronavirus and has remained unreachable since her result came out.
The governor disclosed this via his Twitter handle this afternoon.
One Mrs. Amaka Okoro, who tested positive for #COVID?19 , is wanted for treatment. She is a nursing mother, who has a baby that is already coughing. She lives at #2 Atoe Idubor Str, off 2nd Ugbor, Benin City. She has been unreachable since her results returned positive.
Mrs. Okoro poses a threat to herself, the baby and the general public. Anyone with useful information on her whereabouts should please contact the relevant health and security agencies.” he wrote on Twitter 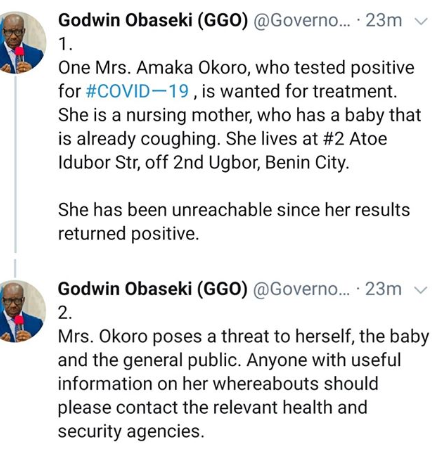