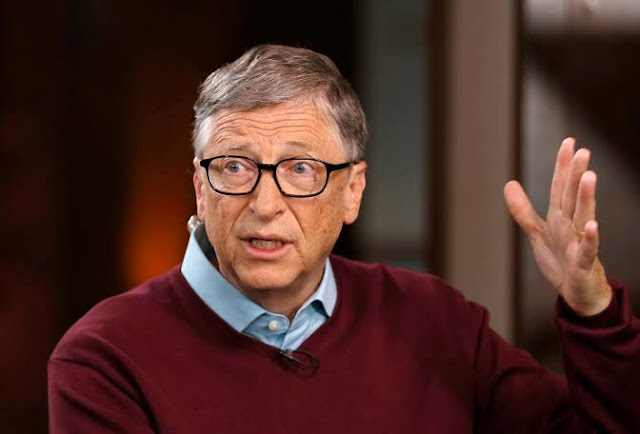 American billionaire, and co-founder of

Microsoft, Mr Bill Gates, has described as spurious, media reports that he offered a $10 million incentive (bribe) to the leadership and members of the House of Representatives to hasting the process of passing the Control of Infectious Diseases Bill, 2020 being considered by the House.

This was as the Adhoc committee investigating the allegation has given the spokesman of the Coalition of United Political Parties, (CUPP), Ikenga Ugochinyere, till Thursday to appear before it with evidence of inducement as alleged by him or face parliamentary contempt.
Ugochinyere, had on May 4, 2020 issued a press statement in which he alleged that the House and its leadership had recieved financial inducement to the tune of $10 million to rush the passage of the bill.
But speaking through the Bill & Melinda Gates Foundation before the House Adhoc committee on Monday, the businessman cum philanthropist who was represented by the country Representative of his Foundation, Dr. Pauliu Basinga said there was no interraction whatsoever between himself or his Foundation and the House.
“The Bill & Melinda Gates Foundation has recently been made aware of an allegation circulating in certain elements of the Nigerian media that the Foundation was involved in a payment purportedly made to the Nigeria House of Representatives. Any such allegations are entirely false and without merit.
“To be clear, the Foundation has not offered any financial incentives to any member of Nigeria’s legislative branch for the passage of legislation nor has it offered any grants to organisations in Nigeria in connection with the same. The Foundation adheres to strict ethical and legal guidelines across all areas of its operations”, Dr. Basinga said.
However, appearing before the panel on Monday, instead of Ugochinyere, was Barr. Tochukwu Uhazurike, a legal Representative to the CUPP spokesman.
Uhazurike told the panel that his client didn’t come to the hearing because, he had filed a law suit challenging the legal ground of the committee to summon him for investigation, adding that “in line with the principles of natural justice, the speaker cannot be a judge in his own case”.
But the committee Chairman, Rep. Henry Nwawuba, (PDP, Imo), told the lawyer that the committee invited Ugochinyere and not his lawyer, as he personally made the allegation and not through any lawyer.
As a result, the lawmakers said they cannot allow any lawyer or legal representative to speak to them on his behalf, insisting that the man who alleged must come forward to prove his allegation.
One after another, they challenged the veracity of the court document said to have been served the House in an attempt to halt the investigation, just as their urged the lawyer to kindly advise his client to come forward with the prove of his allegation as that will also help the House to expose any of its members who must have taken the said bribe thereby bringing it to disrepute.
Nwauba said, “we have a mandate to investigate the allegation by your client, and any attempt in whatever manner to derail it will be met with the full weight of the parliament. You cannot bring a letter to the House on the day of an investigation in an attempt to stop it.
“What we do here is constitutional, and just like the procedures read out to you, he must be here present, accompanied by you, if he so wishes. But we won’t listen to you on this matter, so you tell your principal to make himself available by Thursday, failure of which we are will turn in our recommendation to the House”.
On media houses who carried the said story, Nwawuba said “the Nigerian Media and the National Assembly remain partners in progress on the task of nation building, adding that care must be taken at all times to vet and verify potentially libellous materials before going to press.