Boko Haram Leader Pleading For Protection Against The Nigerian Army 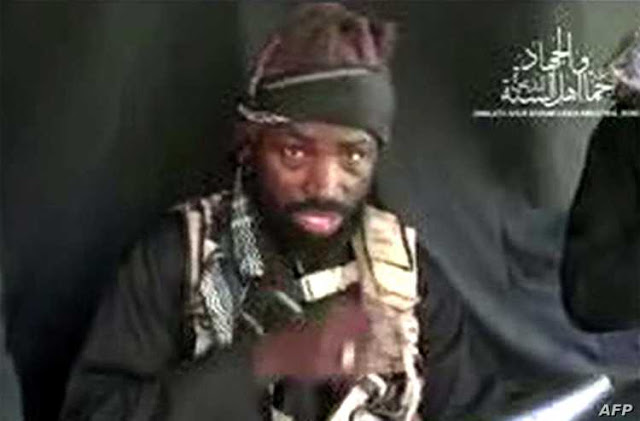 This screen grab image taken on September 25, 2016 from a video released on Youtube by Islamist group Boko Haram shows Boko Haram leader Abubakar Shekau making a statement at an undisclosed location. The embattled leader of jihadist group Boko Haram, Abubakar Shekau, resurfaced in a video posted online, rejecting assertions by the Nigerian army that he had been seriously wounded. The Nigerian army said on August 23 that the longtime militant chief had been seriously wounded in the shoulder in an air raid in which several commanders were killed. / AFP PHOTO / BOKO HARAM AND AFP PHOTO / HO
The leader of Boko Haram, Abubakar Shekau, has cried profusely in a new audio, seeking protection of Allah against the firepower of the Nigerian military.
Of late, the Nigerian military has intensified offensive and recorded a series of successes against the Boko Haram terrorists on the fringes of Lake Chad.
In a 1:22 seconds audio obtained by DAILY NIGERIAN, the Boko Haram leader spoke in Kanuri, seeking protection of Allah against the “devilish act” of Nigerian military, and said they are facing difficulties in this Holy month of Ramadan
If it is the devilish act and wickedness [of the Nigerian military], may Allah protect us from their evil. Oh Allah, keep us firm on your religion. We are poor things who know nothing, oh our Lord, Allah.
“We deserted Izala people to practice Your true religion; we abandoned Tijjaniyya people to practice Your true religion; we deserted the Shiites to practice Your true religion; we forsook our parents, uncles and aunties to practice Your true religion.
“It is because of your religion that we placed knife on Your servants’ necks; but today, they are trying to change us from one thing to another. Oh Lord, have mercy upon under [the blessings] Ramadhan; Oh Lord, have mercy on under [the blessings] of Ramadhan (crying profusely).
Oh Allah give us victory over our enemies. Oh brothers, for Allah’s sake, obey Allah and help me with prayers. This does not mean I am angry.
“May Allah keep us firm on the Qur’an. Allah knows best. Peace and blessings be upon the Prophet of Allah and all thanks be to Allah,” Mr Shekau sobbed.
In a reaction to the audio clip, Bulama Bukarti, a human rights lawyers and conflict analyst who has studied Boko Haram for over a decade, said “this is the first time we heard Shekau cry in this way.”
According to Mr Bulama, the audio suggests that something terrible is happening to the Shekau faction of Boko Haram.
“The Shekau we are used to is a bombastic, ruthless gangster that ridicules, mocks and chortles at his victims. This audio is quite unusual. It suggests that the group is under immense pressure that threatens its existence. Anything that will make Shekau sob must be a serious existential threat and I think it is the Nigerian Army’s ongoing onslaught.
“The army has been releasing news and photos of their successes and Boko Haram itself has lately been releasing eulogies to dead fighters. That is what made Shekau wail in this audio. He thinks it is hard to survive this one,” Mr Bulama said.
He however noted that the audio does not suggest that the Boko Haram leader is surrendering and seeking negotiation.
“But make no mistake that he would never back down, he will not surrender. He would rather die fighting. As the clip indicates, he is as committed to his cause as ever. And history has taught us that Boko Haram is capable of weathering storms and bouncing back from serious defeats. Therefore, I suggest that the Nigerian Army should push on; it is not time to relax. It is time to do even more,” he added.