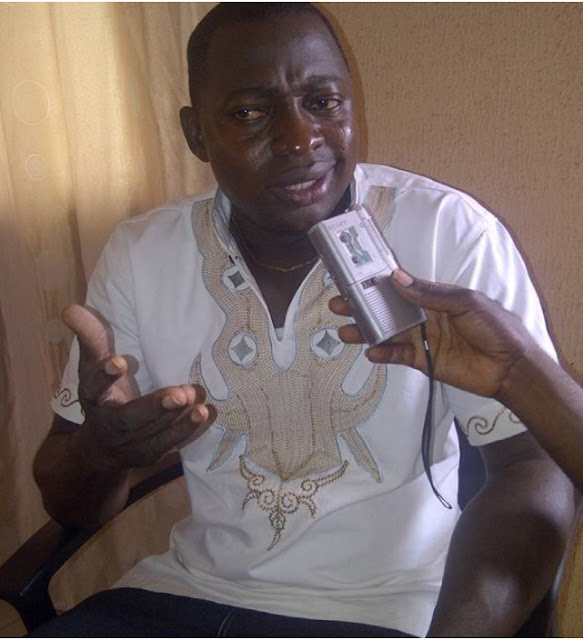 Days after a leaked audio, where Mr
Musbau Esinrogunjo threatened to kill Governor Abdulrahman Abdulrazaq, surfaced online, security agents have after investigations, banned Esinrogunjo from entering Government House till the expiration of the governor’s tenure.

Esinrogunjo, who is a member of the ruling All Progressives Congress in the State, is also banned from attending any public function that has the Governor in attendance. It was gathered this was to prevent Esinrogunjo from carrying out his threat of killing Mr Governor.

According to The Nationalpilot,  leadership crisis rocking the Kwara State chapter of the All Progressives Congress (APC) got worsened on Wednesday as a former Kwara Central senatorial aspirant in the last general election; Comrade Musbaudeen Esinrogunjo attacked Governor Abdulrazaq Abdulrahman over lack of political patronage and appointment in a leaked audio that has since went viral in the state.

Esinrogunjo who is one of the leading voices in the “O to ge” movement that saw the present administration rose to power in the state was also a former chairmanship contestant of Ilorin West Local government in 2017.

In the 23 minutes leaked audio which was obtained by National Pilot, Esinrogunjo accused the governor of fraud and hypocrisy adding that widespread fraud and embezzlement of state funds is taken place under his watch.

He dismissed the Governor’s mien posture as a form of deceit and warned of a serious impending inter and intra party crisis already being spearheaded by aggrieved leaders like former PDP chairman, Iyiola Oyedepo.

While comparing the APC administration with the immediate past PDP government in the state, Esinrogunjo lauded the leadership style of former Senate President, Dr Bukola Saraki which he said was nothing to compare with that of the Governor.

He wowed to strangulate the governor if his (Esinrogunjo) mother dies of her ailment adding that all his request for Abdulrazaq to provide him N2m as running cost since he is yet to enjoy political patronage for all his struggle had fell on deaf ears.

Below is the transcription of the leaked audio:

“When the time is ripe, we will do the analyses that the governor would have been the last person to be elected if it was an open contest. I will also make him (the governor) understand that he is using another person’s mandate and all what he benefited from the office will not be useful for him including his children. I was pursued with knife and guns everywhere during the struggle and yet he is sitting inside the air-conditioned office spending our money. He cannot spend such money. Those that were involved with me in this struggle but are now dead will ask him and I will drag him to the court of the almighty.

I know he (the Governor) has money but almighty Allah blessed me with knowledge and I always pray to Him not to strip me of it because that is my weapon with which I deal with all those I come in contact with.

You people don’t want to care for the masses which were what we complained against former Senate President, Dr Bukola Saraki that made us to reject the system. But is this not a vindication of Saraki? During Saraki’s era despite our complain, people were made senators (among other appointment).
I was informed of a meeting that the Governor had in Abuja with Barrister Kunle Suleiman and Senator Oloriegbe over the issue of Ilorin West Local Government. He was warned that if I am made the chairman of the council, my performance will render the governor and other APC leaders irrelevant because of the way I will run office with people-centric policies. It was now a difficult task for any one of them to call me and tell me that in this government, we don’t want anybody to know that we have money. They don’t want to leave loud for people to know that they are spending money. I was informed that if I am eventually made the chairman, I will be given certain percentage of the allocation in return, what we had criticised Saraki for. But the issue now is that none of them attended that meeting can come to tell me that about it and that has been why the issue of the local government has remained like this till today”.

If they demand certain percentage from the allocation, the masses will hear of it because I will go to the radio to announce to everybody including teachers that those we have voted for are thieves demanding me to part with certain percentage of Ilorin West abolition and I will swear with the Glorious Qur’an to kill anybody that is lying among us. The people will believe me because they know I will not deceive them even if I am left with my last breath. The money that they are collecting from the federal, who is sharing it with them? Is this the kind of government we voted for?

Governor Abdulrahman has embezzled the funds of Kwara State, he has no leader and since his emergence, President Buhari has increased the allocation to the state in double fold. But he doesn’t know us and the likes of Akogun Oyedepo who has been documenting all the funds that has accrued to the state during his tenure without his knowledge. At the right time questions will be asked.

Oyedepo called me around last month to prepare for another inter and intra party crisis which will be serious. There was a time I went to the governor to ask him to empower party men and leaders like Akogun, Femi Yusuf and Chief Rex with lucrative positions in government for their struggles which ensured our victory for them to in turn be able to spend for their followers and party members. People have been empowered with contracts of N400m, N800m and even of N2 billion in Kwara and since I have not been appointed since he came in May 2019 marking one year with today being May 1st, 2020, I should have been placed under subvention of N2m monthly as my running allowance to cater for my followers.

If my mother dies of her (illness), I will go and kill the governor the next morning. If we are not in position to embezzle state funds now, how do we cater for those close to us like my mother who worked and struggled very hard for the APC victory? Nobody even in his family is enjoying him and yet he is siphoning billions. My prayer is that my mother should not die or else there will be trouble, if she dies today, I will go and twist the governor’s neck and kill him the next morning, let him go and spend his loot in heaven.

If I had been the chairman of Ilorin West local Government, the people will really feel the impact because of the style I will use to operate. There are 12 wards in the council and I will be giving N2m each to every area to cater for their people’s educational and social needs. And I know there is money for such because that is just N24 million monthly out of the allocation of Ilorin West. This is in additional to N1m each worth of food for each of the wards monthly. At the council secretariat, my plan was to build a canteen where food will be provided for anybody that visited the council whether I am around or not every day through the month. These we some of the plans we had in mind which was achievable but they don’t want us to achieve it.

On the palliative, look at the huge amount President Buhari gave to each state, where is our in Kwara, the money that Governor Abdulrahman has received in Kwara as palliative (can only be imagined). When you see him, his posture is like that of a man of God who only speaks few words and always smiling. But before you know it, he has emptied the state (treasury). I used to see him as a man of God who Allah has used to come and rescue us in Kwara. He always pick my call and even visit us at home when he comes around, can eat with you. It was my mother who warned me of such hypocrisy of such behaviour. How can he (governor) even have the conscience to sleep despite all the troubles we have been through because of this struggle without given me a kobo, where is his conscience.

About the jeep they were talking about that Governor has compensated me with cash and that was why I have not been given appointment, that was why bought a radio slot of N50,000 to challenge anybody that has any evidence that the governor or anybody has given me a kobo as compensation to come out.