Apr 30, 2020
Sharing Is Caring
As the coronavirus global pandemic continues to ravage major countries of the world with deaths of some notable personalities, unfortunately, Nigeria isn’t left out. 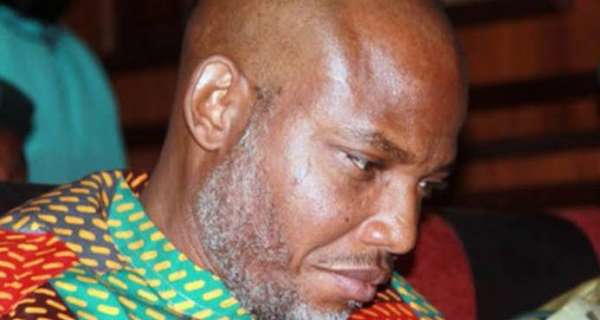 After the dreaded virus was reported to have been the major cause of the death of President Buhari’s right hand man and Aso Villa kitchen cabinet member, Late Abba Kyari, the former Chief of Staff, a group known as Igbos in Nigeria Movement (INM) has added weight to the rumour that Nnamdi Kanu is dead by releasing a tribute mourning the IPOB leader and claiming he died of COVID-19 complications and Spiritual factors in Europe.
Controversial journalist, Kemi Olunloyo had earlier courted controversy once more by saying that the leader of the Indigenous People of Biafra (IPOB) is dead.
The news of Nnamdi Kanu’s death first trended on Twitter last week when Olunloyo tweeted that the IPOB leader was dead and had been cremated in Italy.
However, a day after the tweet, Olunloyo took to Twitter again to retract her claims, saying she confirmed from Femi Fani-Kayode, a former Nigerian Minister who is Nnamdi Kanu’s ally, that the IPOB leader is hale and hearty and not dead as earlier claimed by her.
However, after Kanu delivered a live broadcast on Sunday on Radio Biafra, where he accused the people in Aso Rock and Chinese doctors of being responsible for the deaths in Kano state, Olunloyo took back her words.
Reacting to the live broadcast, Olunloyo insisted that Nnamdi Kanu is dead and that the person that spoke as the IPOB leader during the live broadcast on Radio Biafra on Sunday, was “physically in Nigeria doing his voice over.”
She tweeted: “Nnamdi Kanu has died and gone. The person on a radio/video show yesterday didn’t have to hide their face. That person was physically in Nigeria doing his voice over. As a broadcaster, I can do voices of many public figures.” 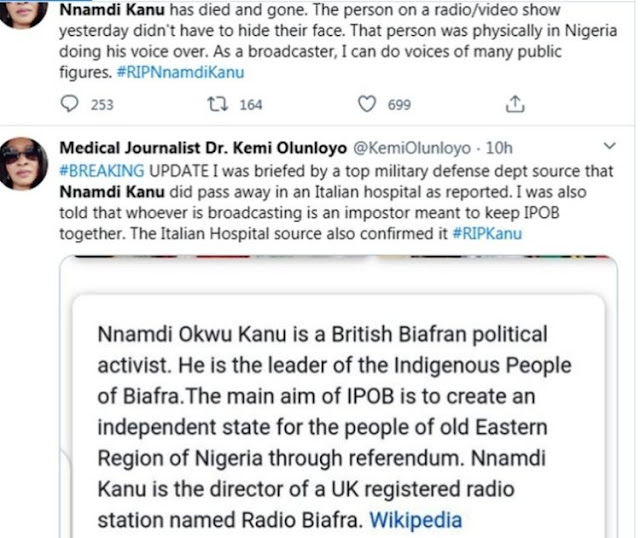 She added hours later: “I don’t spread unverified news.”
With the rumour of Nnamdi Kanu’s death gaining momentum, the IPOB leader released a statement on Tuesday, promising to go live on his official Facebook page today, Wednesday, April 29th. He also said he will speak his native Igbo language and English in an unedited broadcast to prove he is alive and well.
“Unlike the so-called shy president, of Nigeria with his recorded 16 minute newscast from the basement of a hotel in Cuba.
“I will be LIVE here on Facebook, on this page at 7pm with no edited speech or digitally remastered video by the Chinese.
“No photo shopped background, no hyper reality face mask, all questions answered, mother tongue spoken, Igbo in evidence, correct date mentioned and confirmed.
“No hiding from the public. Raw painful truths delivered live and direct to the world with LIVE question and answer sessions.” Kanu said.
However, according to Expressive Info, the group known as Igbos in Nigeria Movement (INM), has issued a statement, condoling with the family and friends of Nnamdi Kanu over the alleged death.
In a statement signed by its President, Mazi Ifeanyi Igwe, on Monday, INM said the IPOB leader “succumbed to a combination of spiritual factors and complications from COVID-19 in Europe sometimes this month.”
The statement reads: “Igbos in Nigeria Movement regrets to announce the passing of the first son of the late Eze Israel Kanu of Afara Ukwu Umuahia in Abia State, Mazi Nnamdi Kanu who succumbed to a combination of spiritual factors and complications from COVID-19 in Europe sometimes this month. His passing is particularly painful considering the losses that his family has suffered in recent months.
“We use this medium to express our heartfelt condolences to his immediate and extended family members and to the entire Igbo nation. We pray that God Almighty grants him eternal rest and that his ancestors overlook his shortcomings.
“While we differed with Nnamdi Kanu in his lifetime over his approach towards the quest to improve a lot of the Igbos, we must state that his passing will cost the south-east the diversity of voices championing the cause of our people. We consequently appeal to Ndigbo and all Nigerians to not desecrate the memory of the departed in keeping with the tradition of not speaking evil of the dead by impersonating the late Nnamdi Kanu or using fake identities to continue his struggles.
“Although he reportedly died of complications from COVID-19, according to the death certificate issued to his family, there is every likelihood that the gods merely took advantage of the virus to visit calamity upon him for failing to perform the customary rites during his father’s funeral because he was on the run from justice. So, while the cause of death appears to be coronavirus, the discerning Igbo knows that the real issue is Ofor-t’Ofor as captured in Igbo spirituality.”