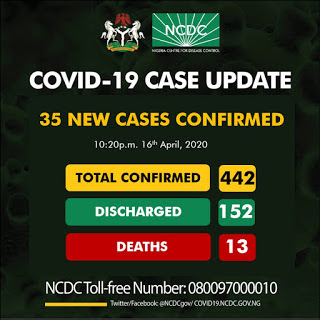 Confirmed cases of coronavirus in Nigeria have increased to 442 after 35 new infected persons were made known on Thursday.

The Nigeria Centre for Disease Control (NCDC) made this known via its Twitter handle.

A total of 152 patients were discharged, three new coronavirus-elated deaths were put down.

It tweeted that, “Thirty-five new cases of #COVID19 have been disclose as follows: 19 in Lagos, nine in FCT, five in Kano and two in Oyo.

Niger- two, Benue- one and Anambra- one.”